Have you been hesitant about how to use Periscope and wondering if it’s for you? This is the second blog advice post I have written about it because I am absolutely in love with this app. However, I do not think it’s for everyone.

First, let’s all laugh for a bit that I have a whopping 140 followers at this point on Periscope. That’s hardly enough to start writing advice articles about it. I appreciate that. But, I spent a month researching it and watching broadcasts prior to doing my first one.

Want to watch it? This is the YouTube video where I show you what happened and include the video I was able to download from my phone after it.

Now get over the fact that I don’t have that many followers yet and pay attention. There are some key observations I have made that can in fact help you make a decision. 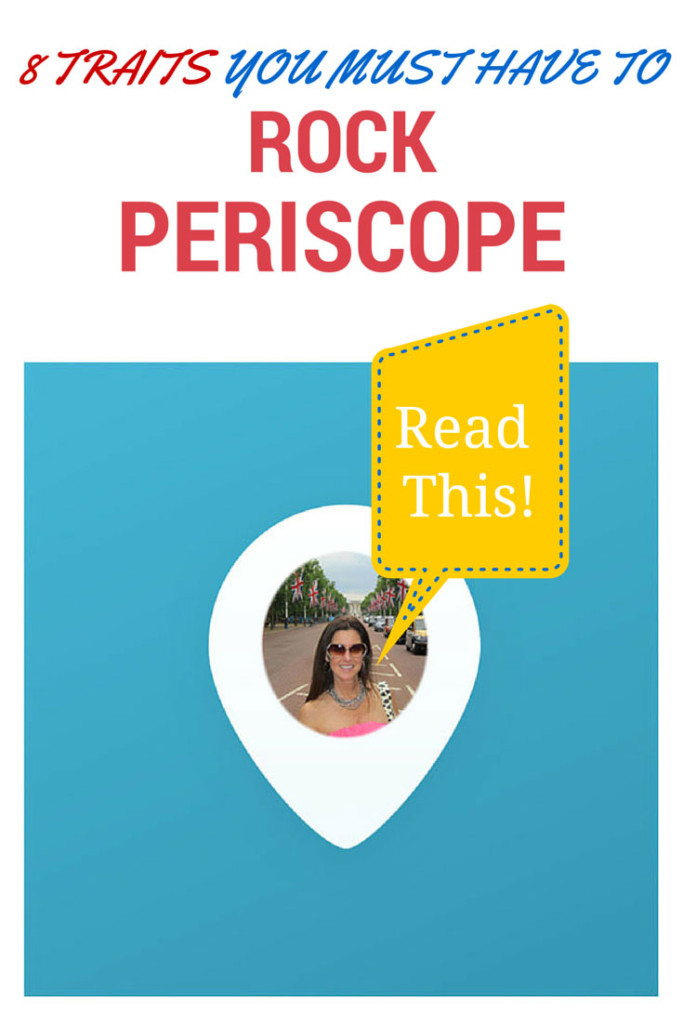 1. Use Periscope If You Are Spontaneous

Recently I saw a really well known ‘global leader in media intelligence’ blow it on Periscope. It wasn’t just my opinion. Within a handful of minutes the negative comments started streaming in during their first broadcast.

It was obvious the Periscope broadcast was scripted. The person in front of the device didn’t acknowledge anyone who joined and just stuck to the content. It was no fun to watch. Ironically, it was about tips for using Periscope. #EpicFail

To succeed on a live-streaming Periscope broadcast, you MUST be able to think fast and adapt. Stick with YouTube if you need editing and rely on a script.

2. Use Periscope If You Are Engaging

To use Periscope successfully, you need to ask your viewers questions and be able to respond to their thoughts and ideas as well, while you are moving forward with your content. This will create the need for them to tune in to you live and not watch you in the 24 hour playback time, if their schedule allows it.

Again, the genius format of allowing people to write their comments and questions during a broadcast is one of the features I love. That’s why they tune in to broadcasts. Someone asked me recently during a Periscope broadcast literally to show him the scenery I was facing while I was in Florida. I loved that! It’s real. I flipped the camera quickly and showed a live shot of what I could see.

3. Use Periscope If You Are Charismatic:

Let’s face it. There are people who will use Periscope for lame reasons. They won’t build a following fast. Have fun with the app and show an energetic personality. There is a reason why comedians are scoring high on the use of Periscope. They wouldn’t make it in their industry without these first two traits I have identified.

Follow Kevin Hart and Howie Mandel to see evidence of this. @kevinhart4real @howiemandel Be warned though, that you’ll have a tough time being able to comment on them because their broadcasts fill up within seconds.

4. Use Periscope If You Are Confident:

I did my first Periscope broadcast sans make up. I was ready to go live and disregarded the fact that I wasn’t looking as nice as I would if I had the opportunity to meet the Queen. 😉 Like Snapchat, there is no chance to Photoshop. If you can’t post a picture on your blog without fixing your face electronically first, stay away from Periscope.

When you are jumping on to live-streaming video you have to know your stuff. It absolutely overrides appearance. Most of the people I love watching on Periscope are in their homes in t-shirts and baseball caps. They aren’t putting on a visual show. It’s not why people tune in.

Great ‘scopers’ have amazing content and don’t let the unedited stream disrupt their security. They recognize and use Periscope for what it is and don’t focus on perfect. Brian Fanzo (who you can follow via @isocialfanz) shows great examples of this several times a day with his content. He knows his stuff and shares it without inhibition or fancy fireworks. His website is proof of his internet power too. Check it!

5. Use Periscope If You Are Willing To Learn

Please don’t mistake confidence with arrogance. You won’t connect with people if you come off as an elite authority. As you read comments, be prepared to learn from people in your broadcast. Yes, everyone tunes in for some utility purpose. It could be for the educational value you give or your entertainment factor. But don’t forget that people will also comment for the purpose of sharing their knowledge too.

Allowing them to contribute, be heard and be recognized for their ideas is pivotal to building your Periscope community.

With this also means that you are willing to make mistakes and not crumble when they happen. Last night I watched a fantastic broadcast that ended abruptly because the Scoper’s phone battery died. A ‘rookie’ mistake for sure. He was gutted that he lost his engaged audience, but he immediately kicked off another broadcast with acknowledgment of what happened and began moving forward.

I doubt anyone can do a live-streaming video broadcast and not flub up a bit. If the thought of making a ‘boo boo’ in front of people is terrifying, just sit back and watch people use Periscope. There is value in that for you too.

6. Use Periscope If You Can Multi-Task

Again, I filmed my first experience with a digital camera on a tripod when I went live. Why? I knew even though it was a poorly shot video, it could still provide value.

Watching it, you can see how I never even looked at my notes. This because of the intense multi-tasking which happens when a person decides to use Periscope. A Scoper needs to manage technology (we all know how fun that can be at times), read comments, welcome and react to anyone who tunes in at any point, and produce meaningful content. It’s quite a bit to take on simultaneously and do well.

7. Use Periscope If You Aren’t a Potty-Mouth

Your broadcast can sit on the app for 24 hours after you go live. It also takes a bit of time to get rolling and to close when you hit ‘Stop Broadcast.’ Keep this in mind before and after you go live on Periscope. I saw a company representative swear as soon as she thought she had finished her first broadcast recently. Obviously, she wasn’t aware that the broadcast had not stopped yet.

If your brand, company or personality is built on a reputation that doesn’t fit well with profanity, you need to think about that when you use Periscope. Do I need to write anything #$@&%*! else about that?

8. Use Periscope If You Are Energetic

You don’t have long to catch people’s attention on the app. They can quickly tune in and tune right out if they feel you are sluggish. If you think about the amount of time you get for a video on Vine and the suggested times people say you have to identify content on YouTube, you’ll understand this.

Viewers have many, many options for where to get information. Have passion for what you are sharing. A great sunny smile goes a long way, no matter where you are sitting in the world.

Final Thoughts on Traits You Need to Use Periscope

It’s a real adrenaline rush during and after you use Periscope. While you are making your decision if it’s for you, give some thought to whether or not you have these traits. For those of you who have watched or completed your first broadcast, what can you add? Is there anything that you think doesn’t apply?

If you’d like to tune in to my Periscope broadcasts, you can find me @sunny_in_london.