Are you British and planning on visiting Florida?

As an American expat living in London, I’m always amazed at what the English don’t know about my home state. Through many conversations with Londoners, I’ve learned that there are quite a few misconceptions about Florida that British tourists should understand before their American holiday to the Sunshine State.

When I finally had the chance to take my British husband to Florida for the first time in his life, my suspicions regarding what he expected proved true. 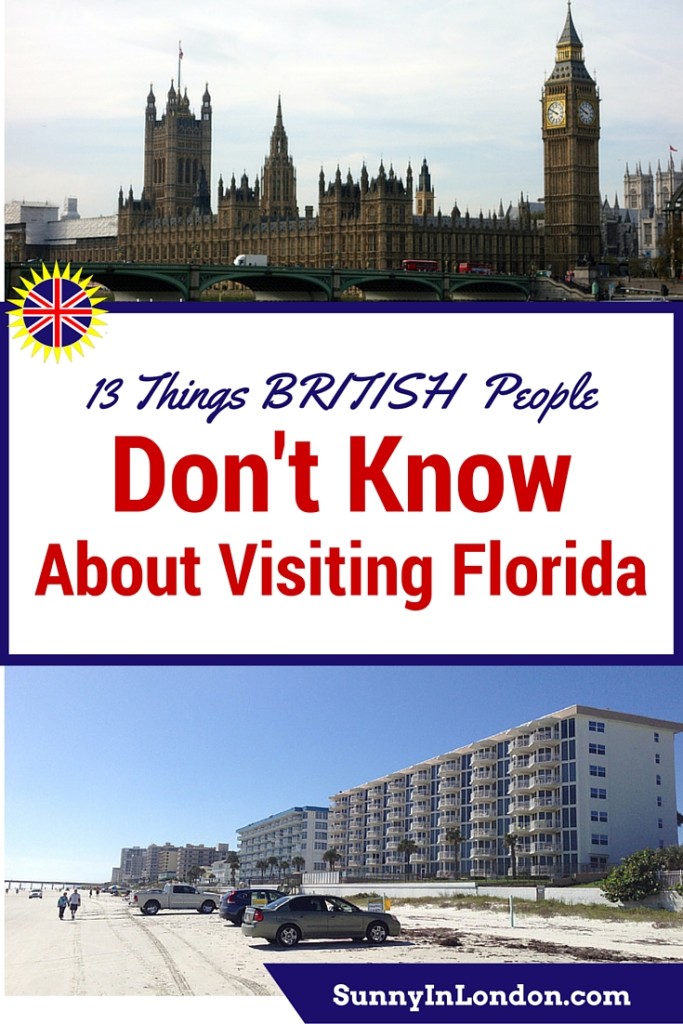 The biggest surprise for British tourists is the Florida weather. First, it’s Hurricane Season from June 1st to November 30th. While it’s unlikely there would be a hurricane in June or November, the odds are high in the remaining months.

Florida is beyond miserable in the Hurricane Season months. Outside temperatures hit around 90 º Fahrenheit during the day and don’t drop too much when the sun’s down. The humidity is morbid. All Floridians will agree to that.

From late July to mid-September you can nearly set your watch to an afternoon Florida thunderstorm. The skies turn purple around 2:00 pm and all hell breaks loose. British tourists might find the explosive thunder and lightning in our sky pretty scary. It gets loud.

We have tornadoes too. I’ve lived through two and actually spent several days on disaster relief assisting local residents with salvaging their homes.

Even on a cloudy, overcast day in the summer months you can still get a lobster level burn, especially if you’re British. Sorry.

Please wear sunscreen from the second the sunrises until you fall asleep at night in your hotel room. 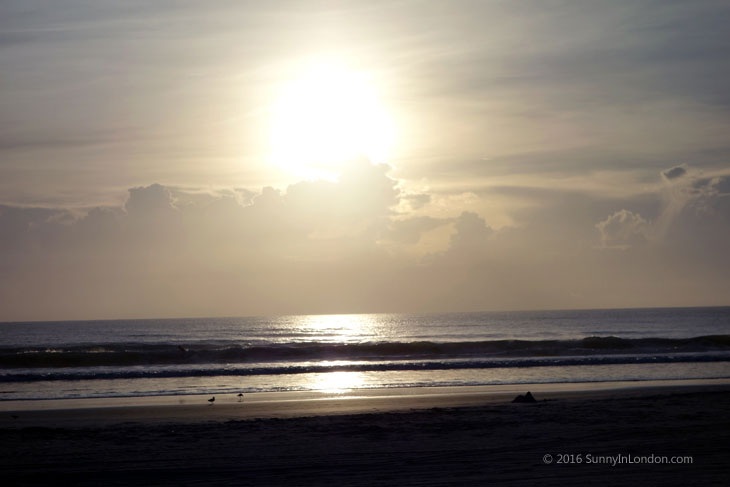 Cover your entire body with it, even if you plan on wearing tube socks with your sandals. 😉

Most people in Florida are up early and out by 8:00am.

Again, we can attribute this to the heat. It’s just easier to get all of our errands accomplished before the sweltering heat. A boiling car is a real nightmare on a busy day. I can’t count how many times I jumped in my car on a sunny Florida day and had the back of my legs seared on the seat beause my Daisy Dukes weren’t long enough to create a barrier between my skin and the seat.

Also, because our hospitality industry relies on outdoor life and sports, many people need to arrive to jobs early in order to prepare pool decks, boats, and jet skis for tourists.

The first observation my husband made while looking out the airplane as we made our landing approach to Daytona Beach is, ‘That’s really flat!’ 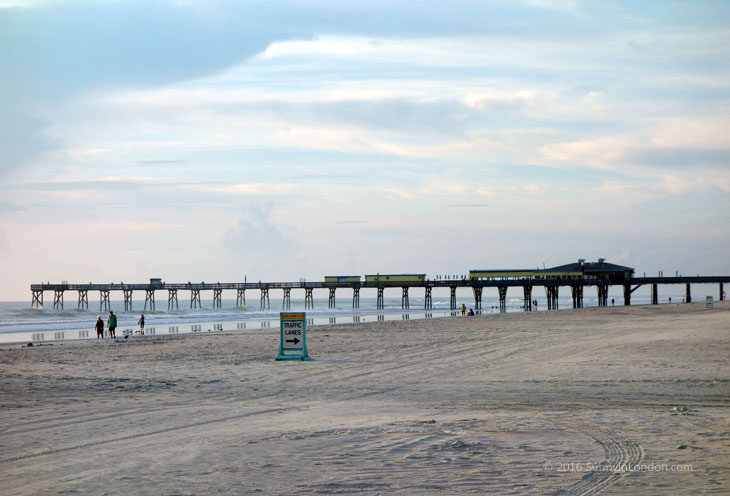 Yes, not much of Florida measures above sea level. This is why we don’t have underground transportation or basements in our homes.

Basically, everything that happens in Florida takes place on the mid to lower perimeter. With the exception of a few spots in the Panhandle, Jacksonville, and Orlando, the rest of the state is swamp land. Yes, UF (University of Florida) fans I know exactly what I said there. Can you tell I am a Florida State University alum? 😉

While there certainly is more to Florida than Disney World, it’s basically all along the coastline. In fact, one of the highways that runs across the Southern part of the state is called ‘Alligator Alley.’ It was named this because when it was built in the 1960’s people felt it would be useless for cars and likely be an alley for alligators.

I try to avoid conversations about this, but the simple fact is a lot of people have guns in Florida. Our laws are different for guns in each state. Just to give you an example, read this article about what each state Googled the most in 2015.

Other states looked for:

While we weren’t the only state to search this type of topic, it does say a lot about our gun culture.

Florida is full of gated communities. Many have security guards on duty at gate houses. When entering, guests of residents need to be on a clearance list and/or wait until the resident is contacted via phone for approval to enter. 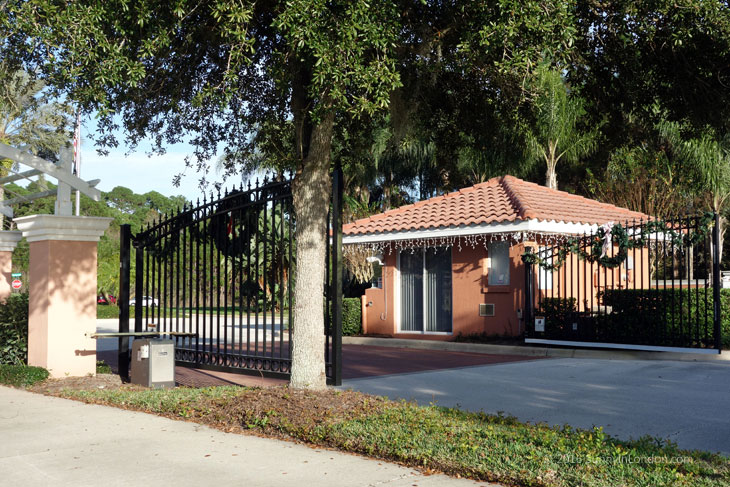 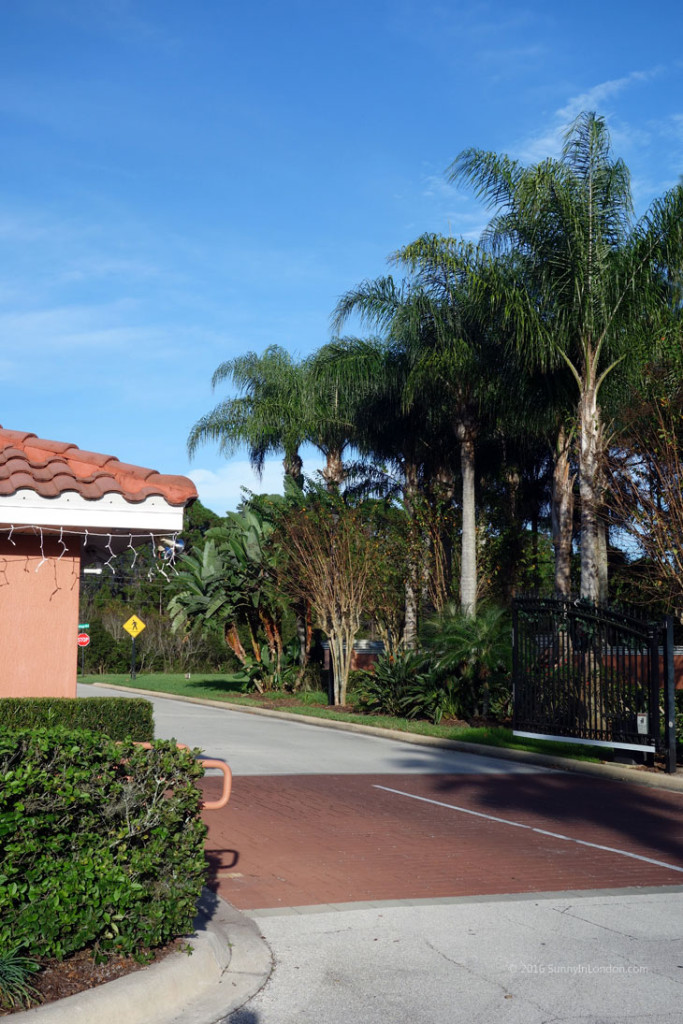 My husband thinks the fountains and standing water areas all over the gated community where we stayed are particularly intriguing. 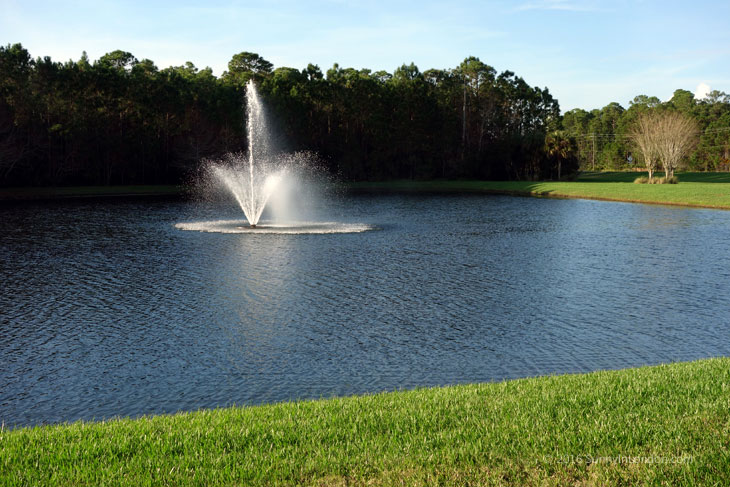 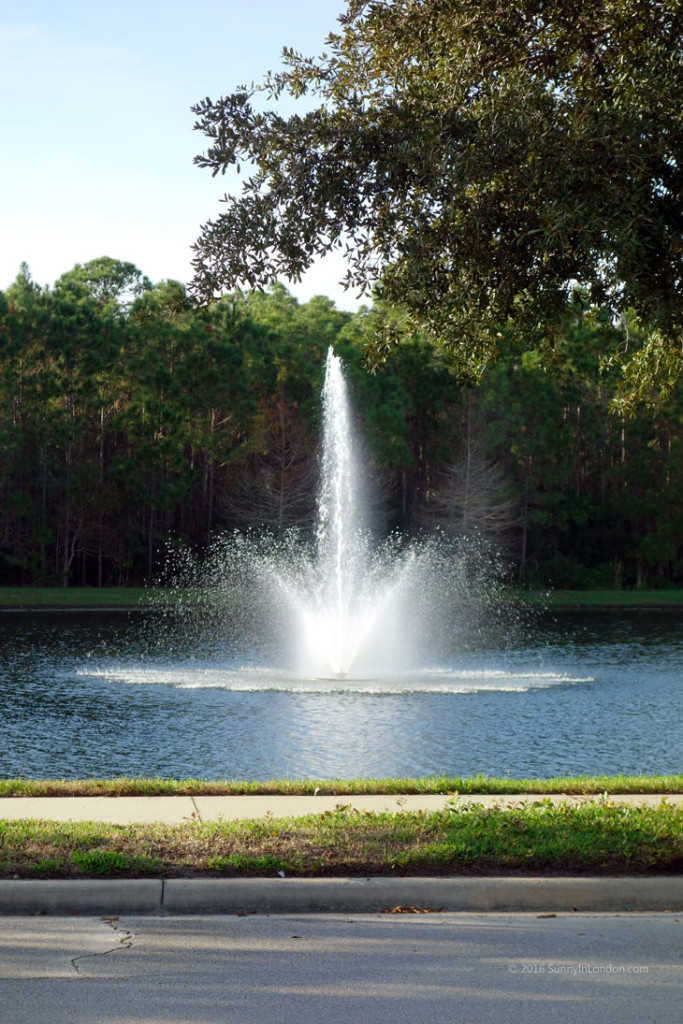 Florida is crawling with creatures. The most common reptile is a lizard. They are stealthy little suckers. Further, if you try to grab one by the tail, it pulls off as a defense mechanism and the lizard scurries away. They’re also very clever at camoflauge. Can you find the lizard below? 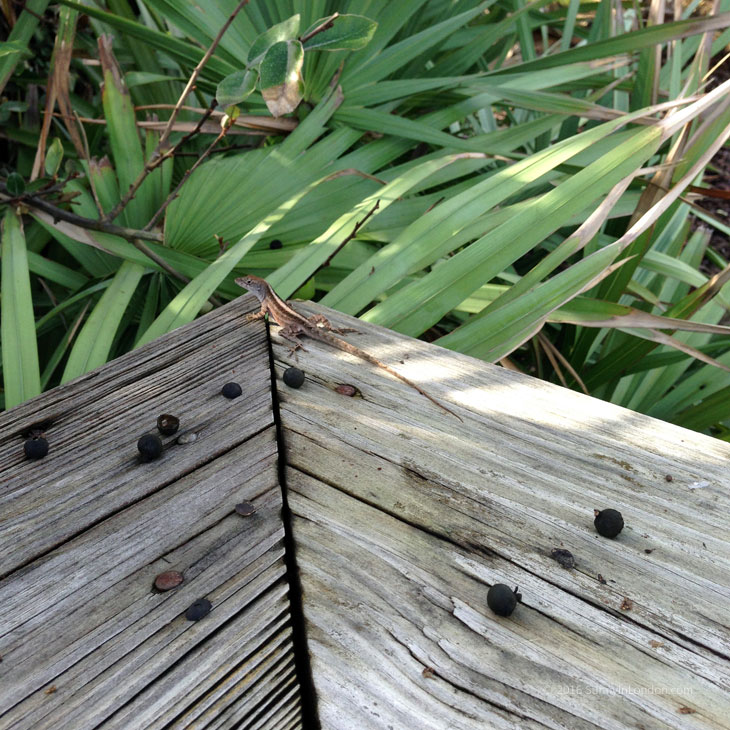 Next on the slithering list is snakes. They are no fun. Luckily, they aren’t common enough for me to capture a picture of one for you while I’m on holiday in Florida writing this. Gators are slightly more rare, but seeing them isn’t a huge novelty for Florida residents.

But, we do enjoy eating them. These are Gator Bites from the Ocean Deck in Daytona Beach. 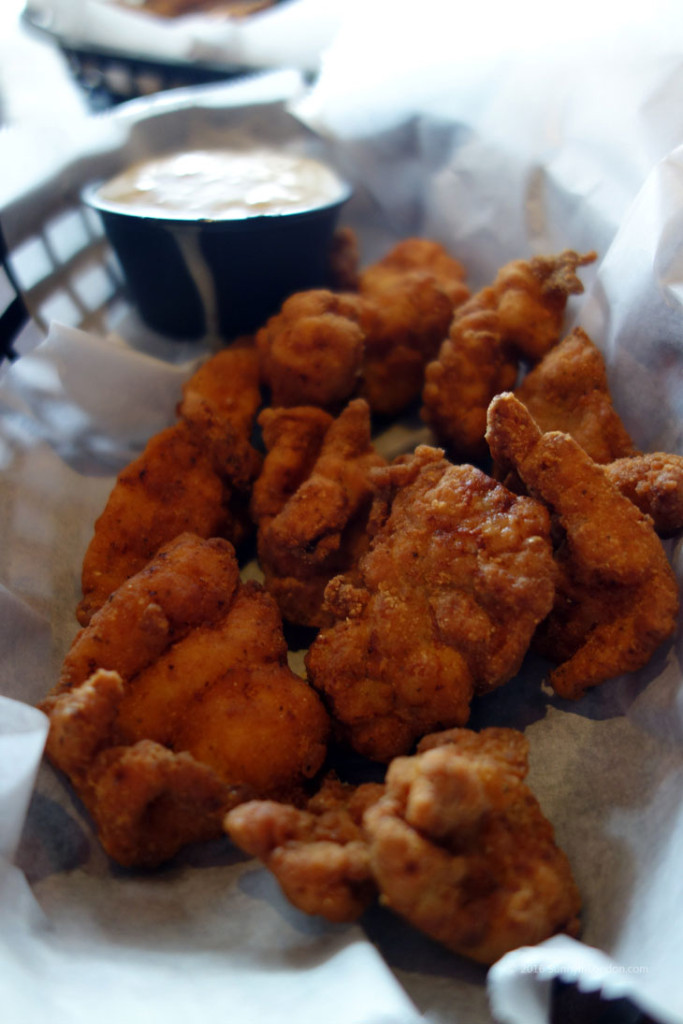 Finally, Florida is flooded with bugs. Residents will regularly complain about Love Bugs covering the front of their cars in September. They seem to splash all over vehicles during this month every year. A common joke for Florida is that we have two seasons: Summer and Love Bug. Here’s a screen shot (literally) of tons of bugs in the morning. They’re everywhere! 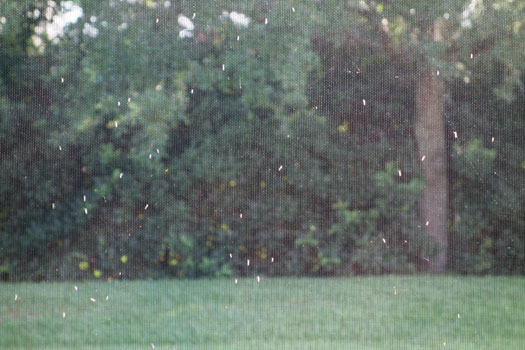 Since most people originally came to Florida from other US States, they brought their professional sports loyalties with them. That means people who live in Miami may actually be die hard Buffalo Bills fans because they’re from that area in New York. Just because you live near Jacksonville doesn’t mean you cheer for the Jaguars. You could be a Pittsburgh Steelers fan, like me.

However, there’s a fierce loyalty to college teams. (British people can think of these as University teams).

The Autumn season is an intense time for college football fans because the Florida teams have been historically some of the top teams in the United States. Don’t joke about rivalries. People take their teams (Florida State Seminoles RULE!) seriously.

At one time, Florida was predominately a place where people retired. That phenomenon is about 20-30 years old. It’s common now to actually meet people who were born in Florida.

Further, the Naples area is now one of the hottest, affluent communities for young professionals.

Leave your Michelin star expectations in the UK. Our state is founded on Seafood, Mexican and Cuban cuisine. It’s not glamorous, but it’s damn good.

My husband kept talking about getting lobster before we left for our holiday. We don’t really eat that a lot in Florida. However, you will find crab and shrimp everywhere. That’s our fine dining. It usually looks like this… 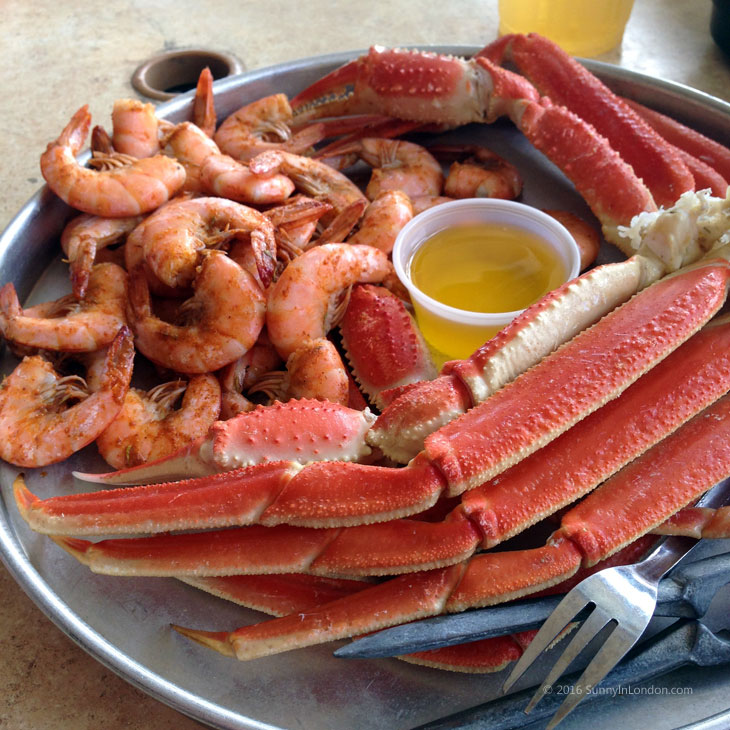 Floridians don’t like to rush. The attitude toward most things is very casual. Floridians have dress flip flops and like to wear shorts to dinner. Don’t try to be fancy, unless you’re in South Beach. However, even there you can be chic in sandals. But a little advice- Miami is a really fast area where you need to be extra mindful of common sense and safety.

Don’t expect your coffee to be served at lightning speed at any location in Florida. And, good luck getting anything but iced if you fancy tea.

13. British People Visiting Florida Should Know Where to Go

Don’t ask for the ‘loo’ or toilet. That won’t translate well in Florida. Instead, ask for the Restroom. If you’re timid, just look for a sign that says where to pee. 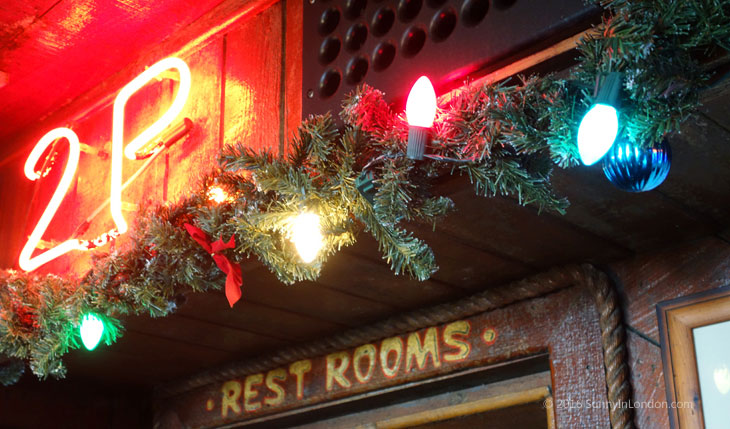 Those are the serious and slightly silly misperceptions I can list for you. I’d love to hear your thoughts either as a Londoner, British tourist in Florida, or native Floridian. What else can you add? What questions do you have about a holiday in Florida? If you’re getting ready to visit London as an American, you might want to subscribe to my YouTube channel so you can see learn advice for shopping and things to do.

Update: Don’t miss this YouTube video published in August 2018 with even more tips!

Like Loading...
Tour the BBC Broadcasting House in London
5 Things To Do If You Want a Travel Tattoo