Have you been to any raves in London lately? If you had asked me that a few days ago, I would have said no. All of that changed Wednesday morning at 6:30am.

What transpired was epic.

My alarm went off at 4:45am. I threw on my ‘Will Blog for Food’ shirt, did my make up and was out the door by 5:30am en route to the hottest morning party in London- Morning Gloryville’s Two Year Birthday Party.

I’ve been following the rise of Morning Gloryville for nearly two years. Although they received tons of press, I think their raves in London are still a bit of a secret. Well, until now 😉 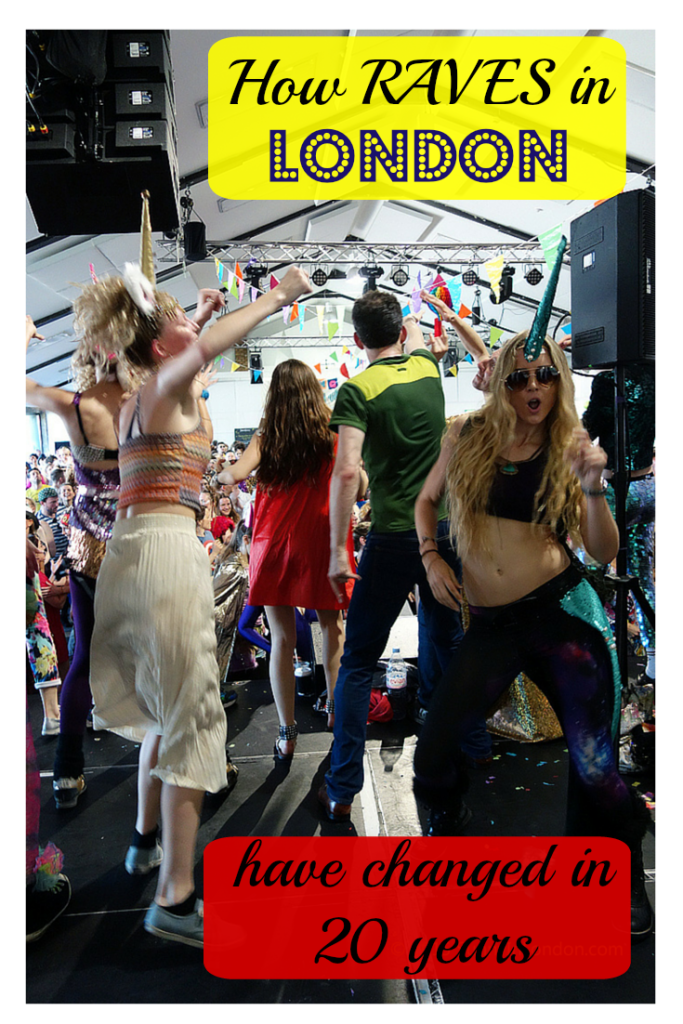 When I arrived at Bethnal Green Underground Station, I asked an attendant for directions to the Oval Space. If I had only noticed the two girls behind me with neon colored hair, I could have skipped asking for help.

Clearly, they were heading to the morning rave.

Like zombies assembling in the streets during a bad B-list movie, the ravers appeared from all directions. Except, they weren’t scary at all.

In fact, it looked as if a cartoon world came to life on Hackney Road as people of all ages wearing tutus, funky hats, capes and other creative apparel formed a motley rainbow path down a side street. 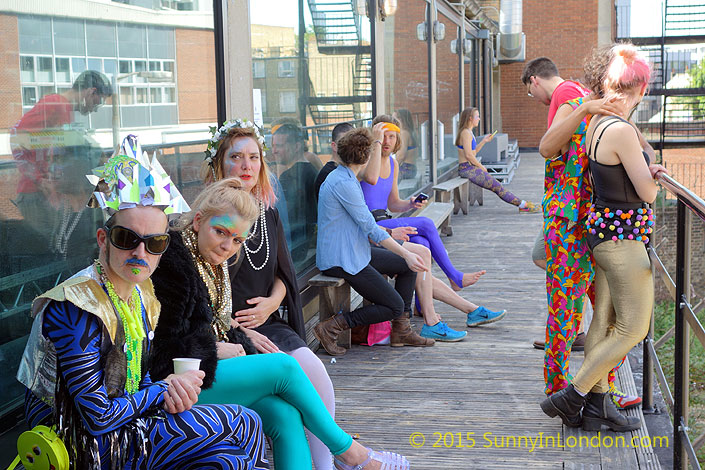 I’d say ‘we’ but this was the one time in London that I felt wearing all black was entirely out of order. It was my first miss of the day.

I followed the glitter trail with a pounding heart.

It has been nearly 20 years since I hit raves in London. Oh yes, Mr. Sunny and I first bonded at the NBC London Bureau during my university internship when he discovered this little Florida girl was a Club Kid. Yes, I used to enjoy life like this doll next to me from Love Specs. 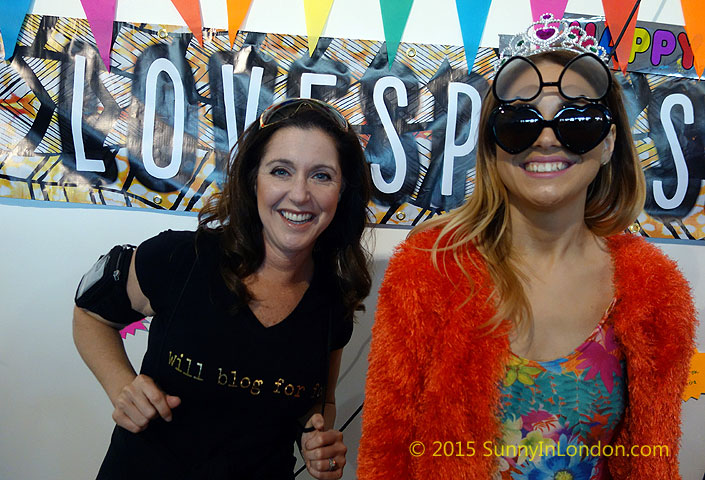 Don’t tell my mom, but I had a little run during my last year at Florida State University as a club dancer. I went to clubs and danced on speakers, stages and other platforms during raves.

Attending one of the Morning Gloryville raves in London brought back tons of memories. 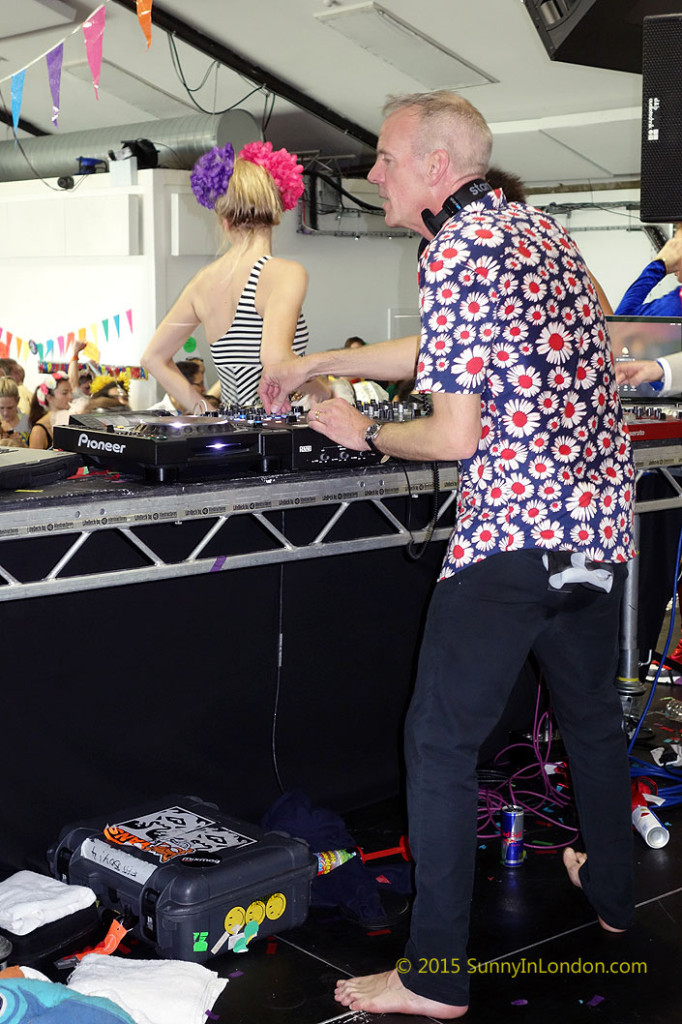 10 Ways Raves in London Have and Have Not Changed:

1. A Real Boost- Since I missed my morning pot of coffee, I grabbed one about an hour after arriving. Knowing that purely the music and coffee were the only stimulants people were enjoying was awesome. I love that Morning Gloryville promotes alternative and holistic health. 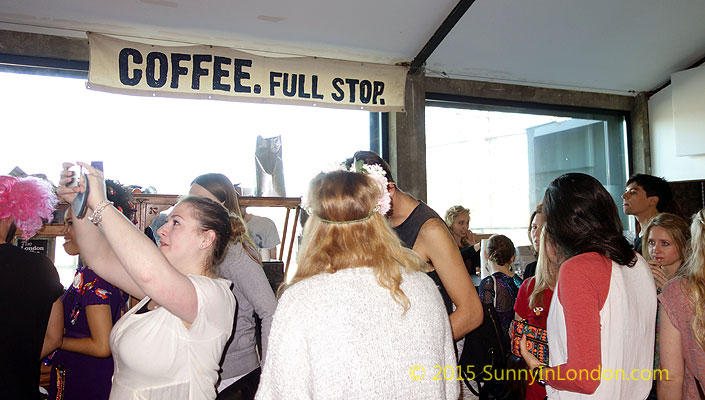 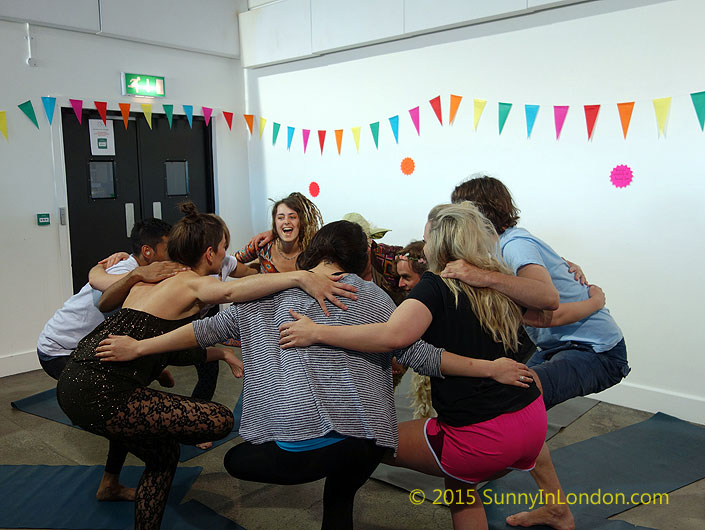 2. Guilt Free- I didn’t feel guilty about attending this dance party that started in the early hours of the morning. Countless times in the late 90’s I pulled in to my parents’ drive way in Florida hoping I wasn’t parking my car over the morning newspaper. Yes, once I woke up to the sounds of my father screaming about the paper being trapped under my car tire.

3. Lights On- No one cared about how they looked in the light. Do you remember the days of dipping out of a club before the lights came on so now one would see your wet hair matted from sweat and mascara running down your face? That’s when we really looked like clowns!

In fact, having the lights on makes crowd surfing these days, so much easier… 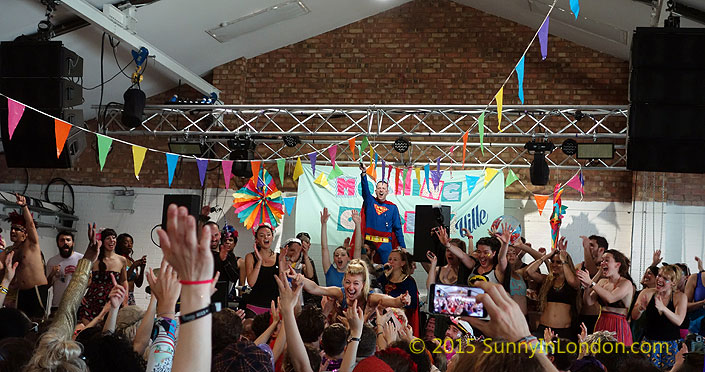 4. Kids Can Dance- Tons of people brought their kids to Morning Gloryville. Years ago that would’ve been an offense. All kids at this rave were mandated to wear headphones. Some danced. Some were just enthralled with blowing bubbles. You’ll really enjoy seeing them in the YouTube video. 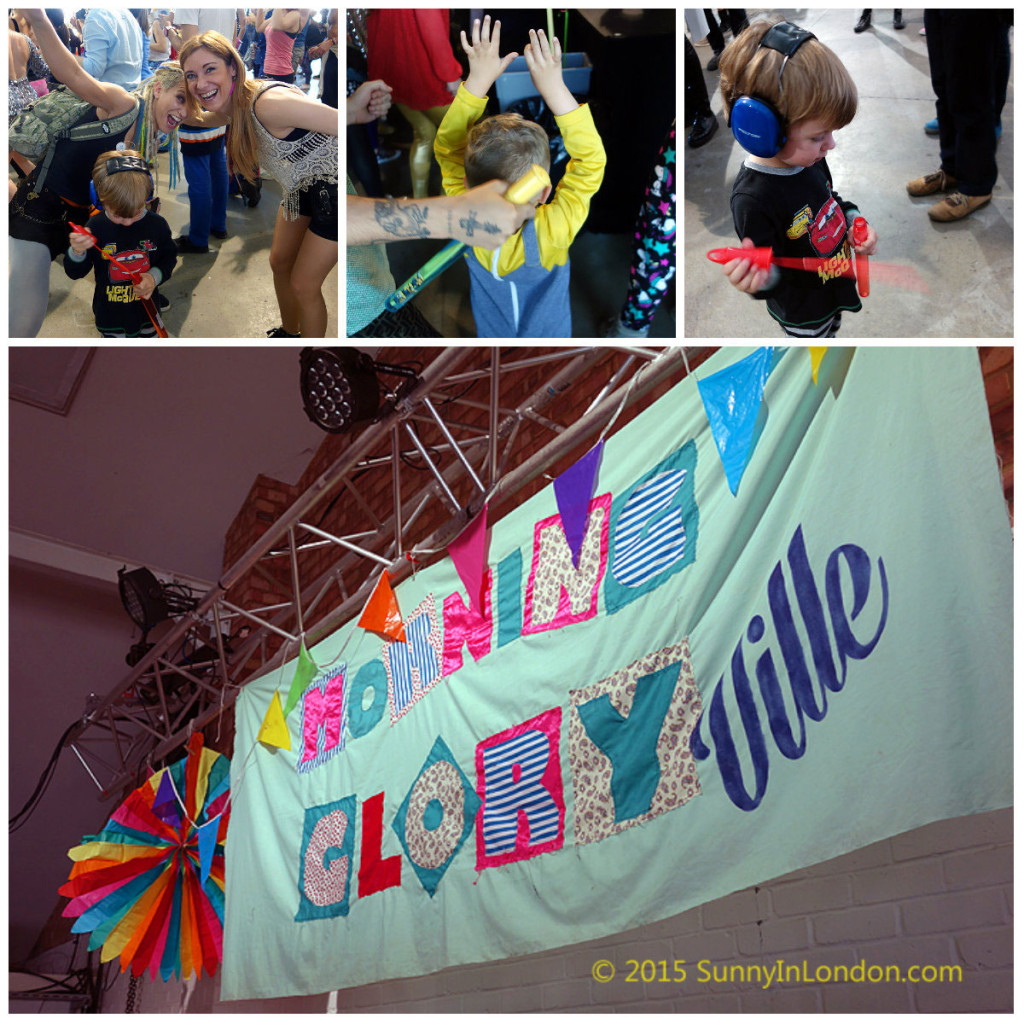 5. Costumes- Raves in London are still about rocking up in gear that shows you can party. In fact, the more out of this world, the better. 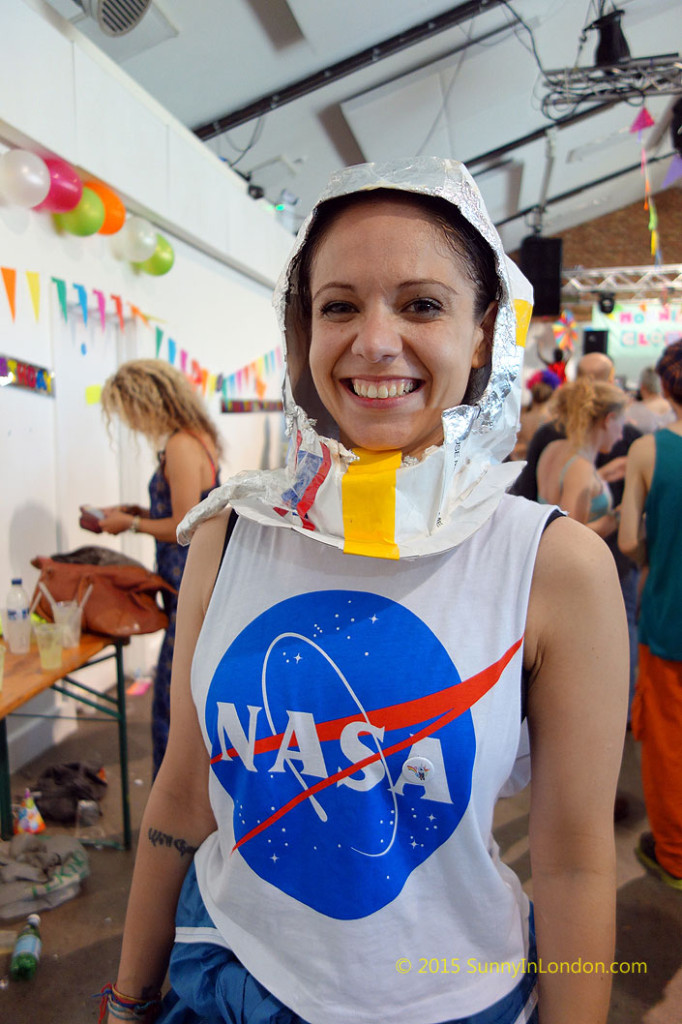 Maybe this guy thought the rave ticket said, “Come as you Centaur‘? 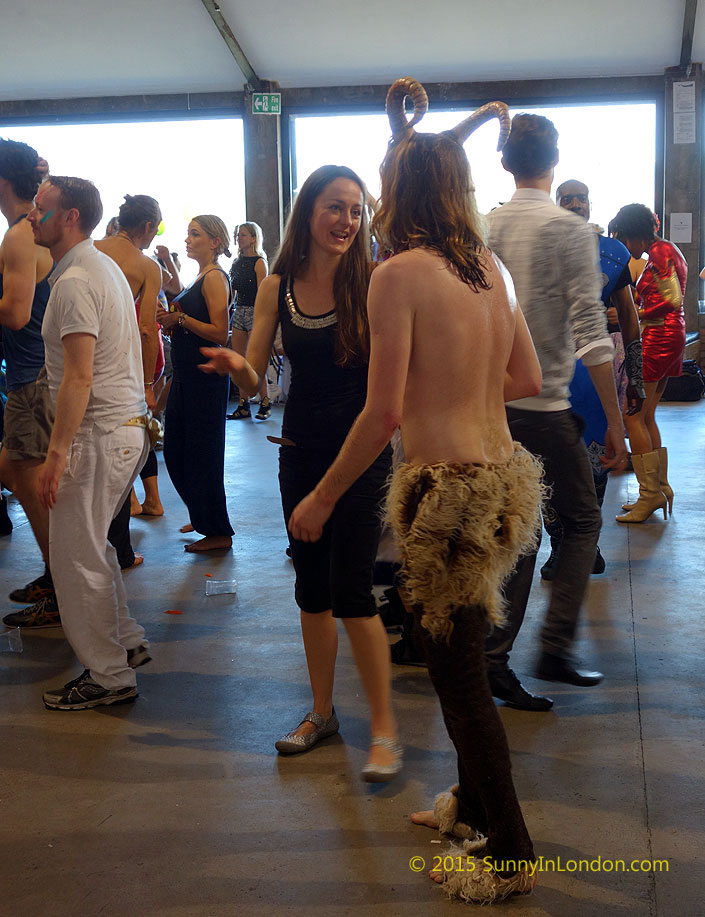 Others just went with the ‘shake what your mama gave ya’ fashion statement. 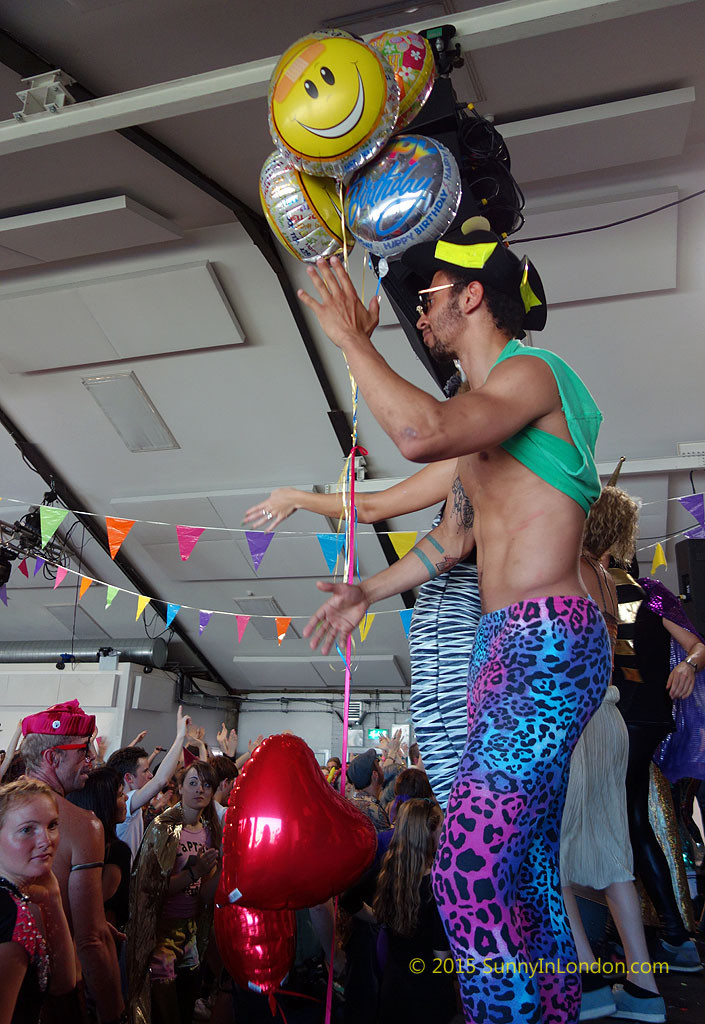 6. Oh the Places You’ll Go- When I went to raves in London back in the day, it was common to show up in a baseball cap. Super cool ravers hit the dance scene in a Cat in the Hat top hat. Now things are very surreal. 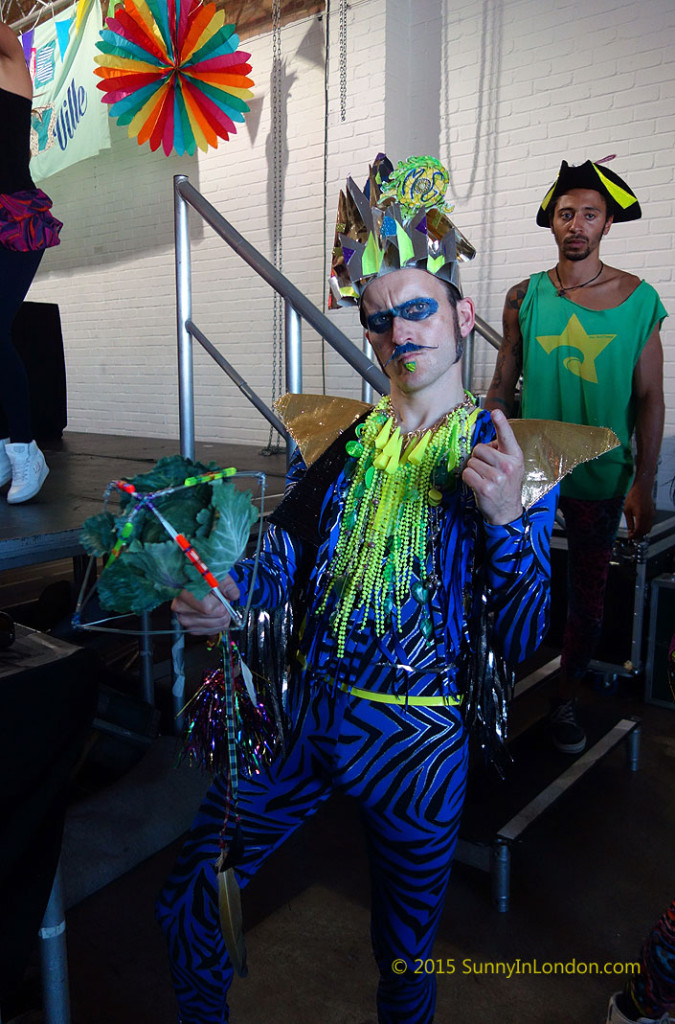 Holy smokes! Some people even make attending raves in London a religious experience these days… 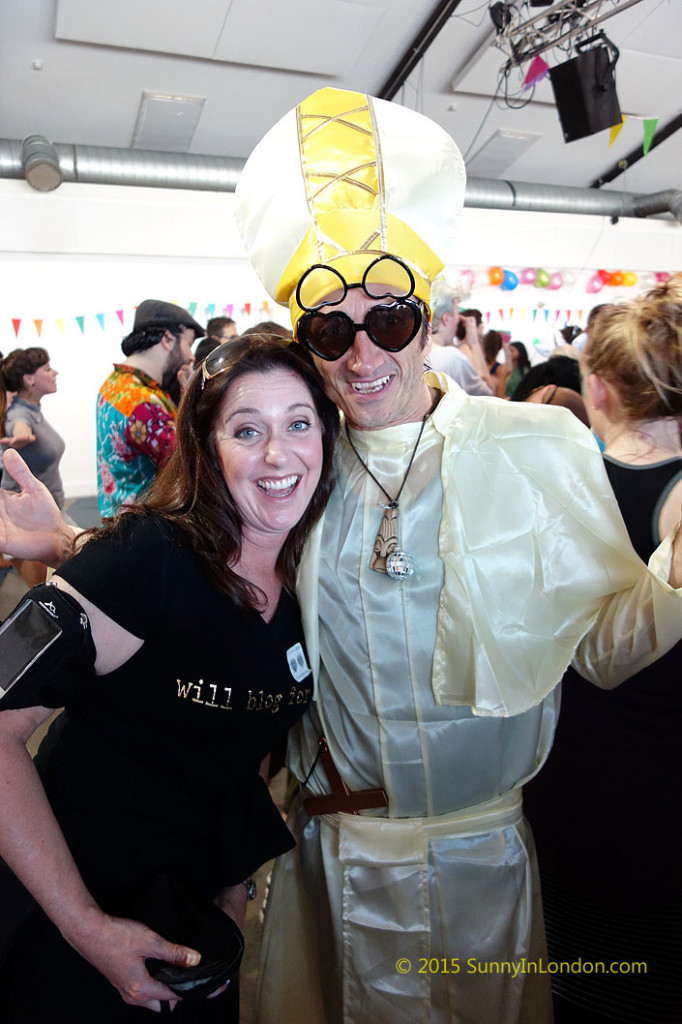 7. Music- People’s comments on the Vine, Snapchat and Instagram videos I uploaded indicated they were shocked to see the Morning Gloryville rave featured music from ‘back in the day.’ Hey, it’s good s**t.

8. Leaving High- I left with such an organic feeling of being able to conquer the world at 10:30am when the dance party ended. No wonder so many people hit this rave the last Wednesday of each month before a day at the office. 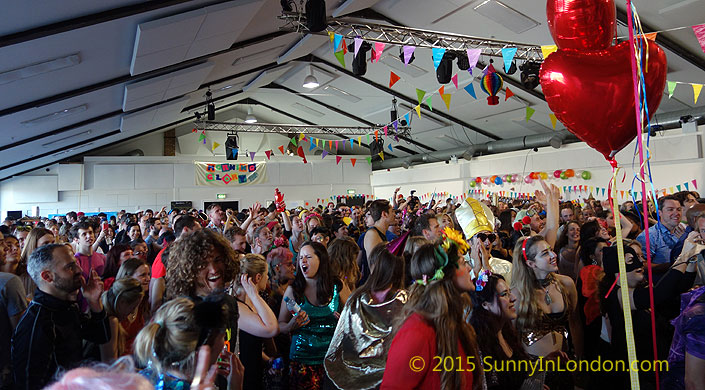 9. Masks-  The first person I asked to take a picture with me said yes, and then he threw on a face mask. While I totally get it, that would never have happened 20 years ago. Perhaps he was hoping his employer didn’t see him tagged on Facebook? 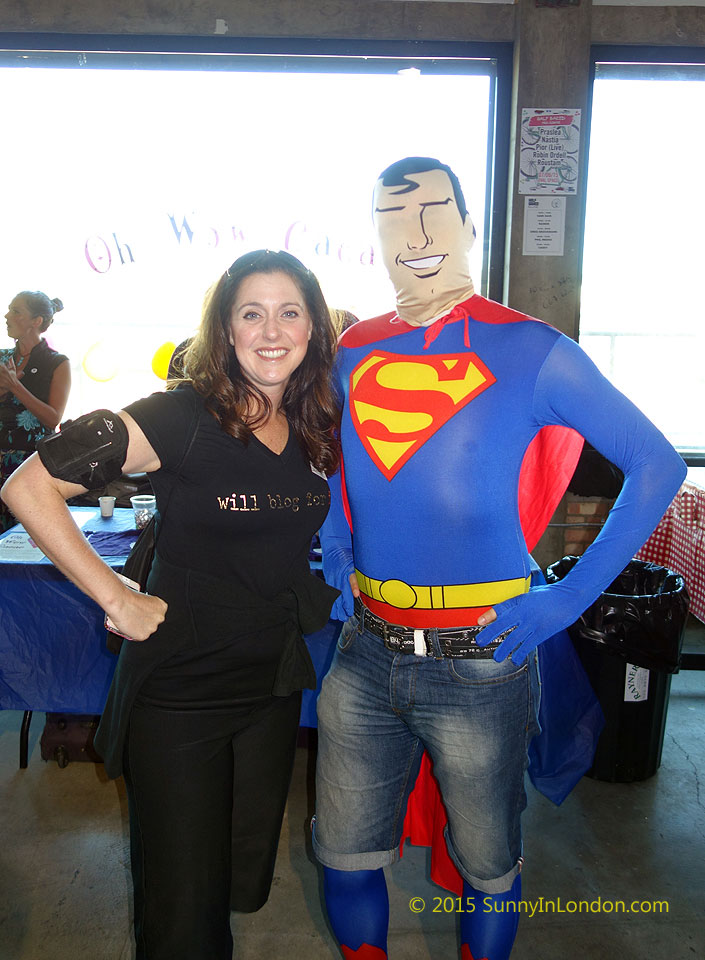 10- Cords Suck- While this music is dubbed Electronic, it sure is better unplugged. Here’s my bag of blogger tools I brought. 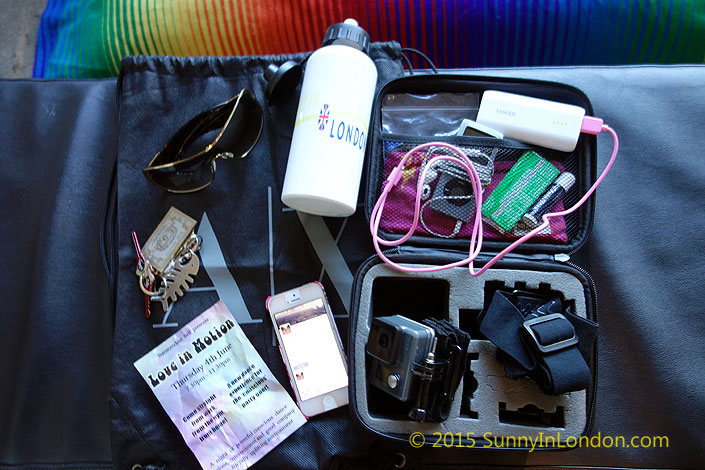 Gone were my days of just showing up and dancing. Dammit. I missed that. In fact, when I inquired about getting on the stage to take crowd shots, I learned that only the paid unicorns get to dance in the front row. The only thing projecting off of my head was a GoPro HERO 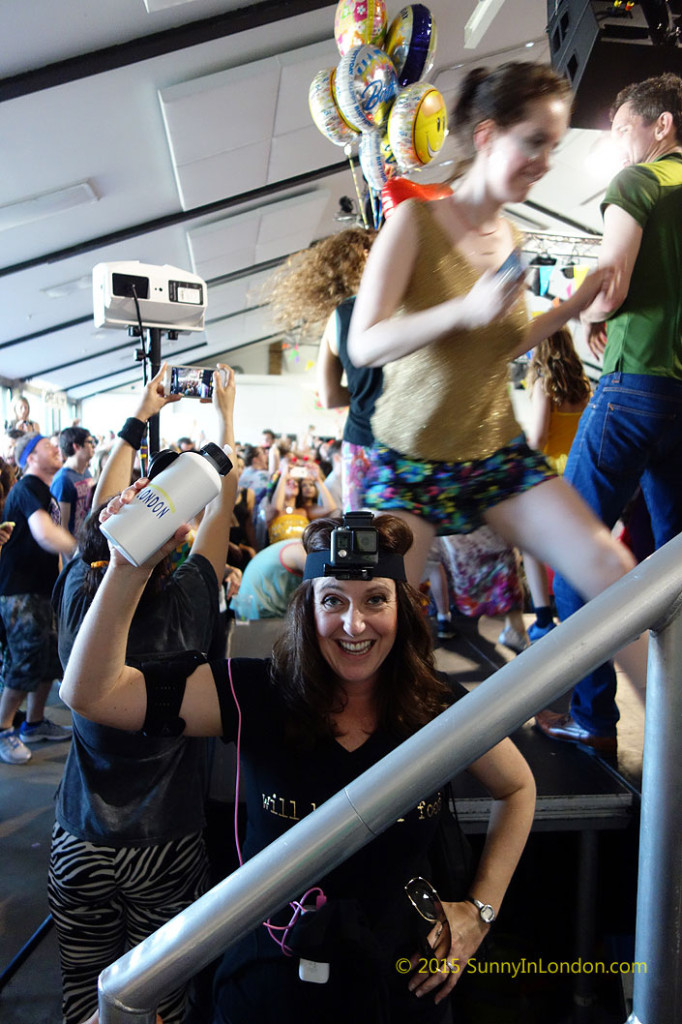 So, I decided next time I go to one of the Morning Gloryville raves in London, I’m dressing like a unicorn and I’m just going to dance, dance, dance. 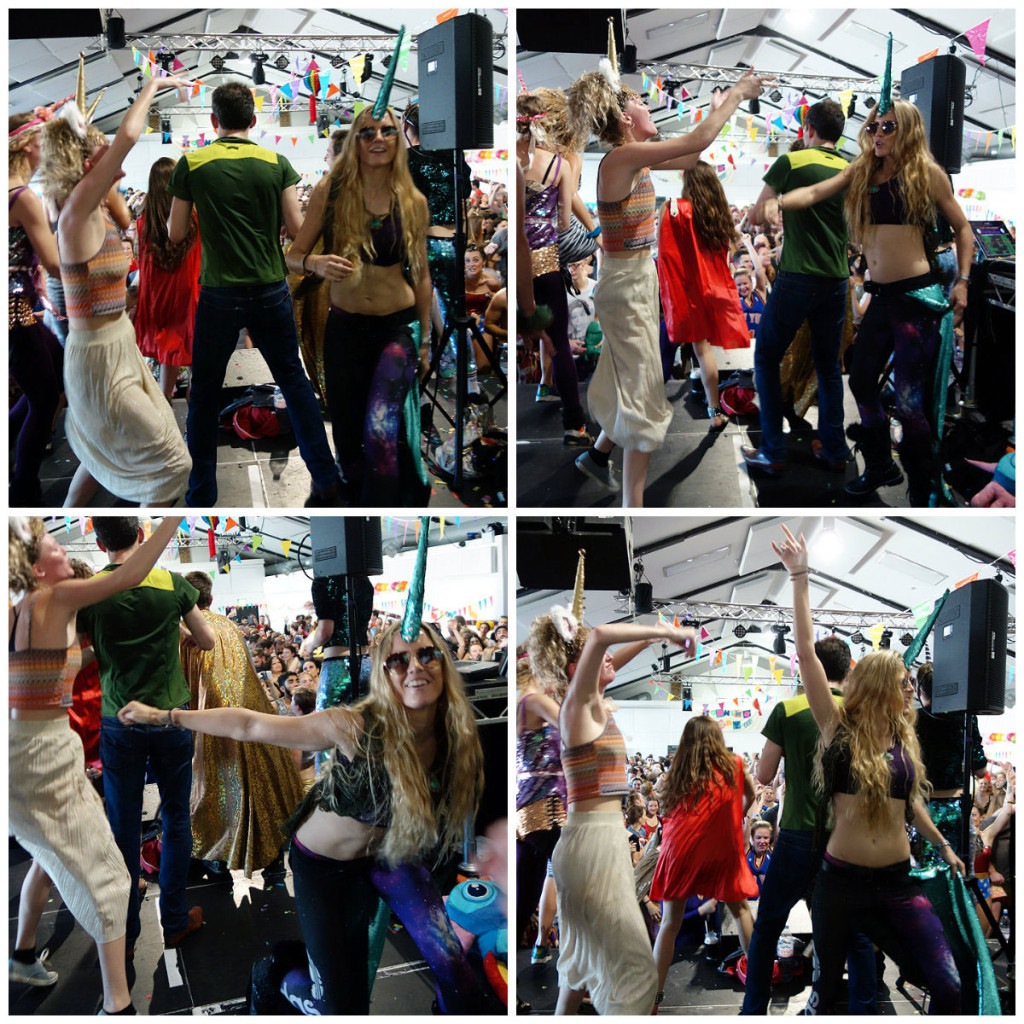 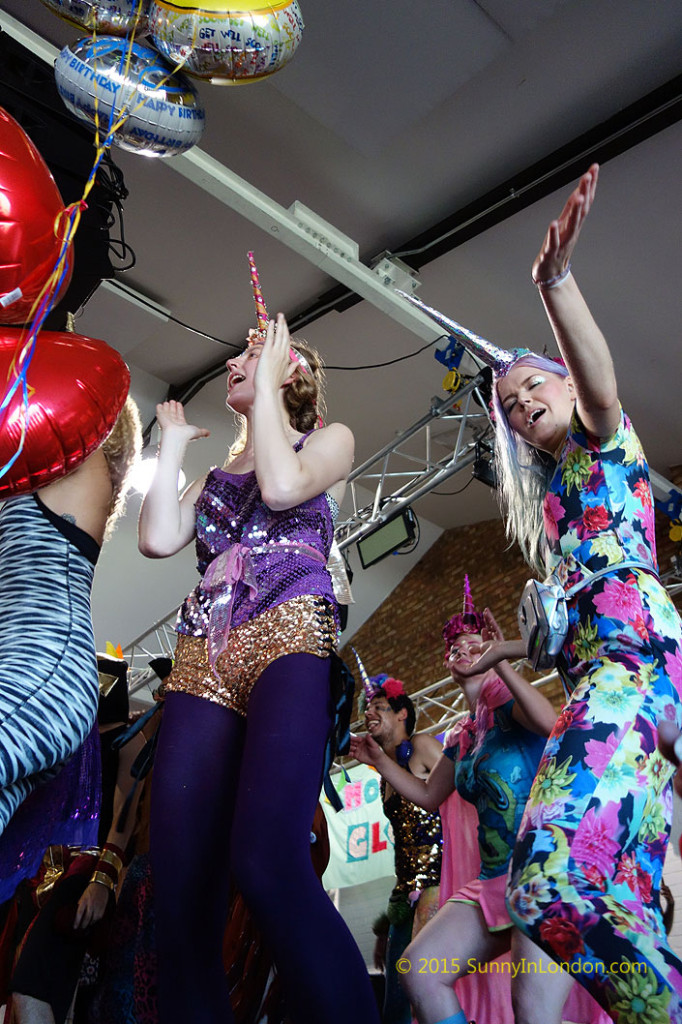 They don’t have to pay me. Perhaps I will just get a shirt that says, “Will dance for glitter.’ Because, let’s face it, no matter what decade, glitter will always be cool. 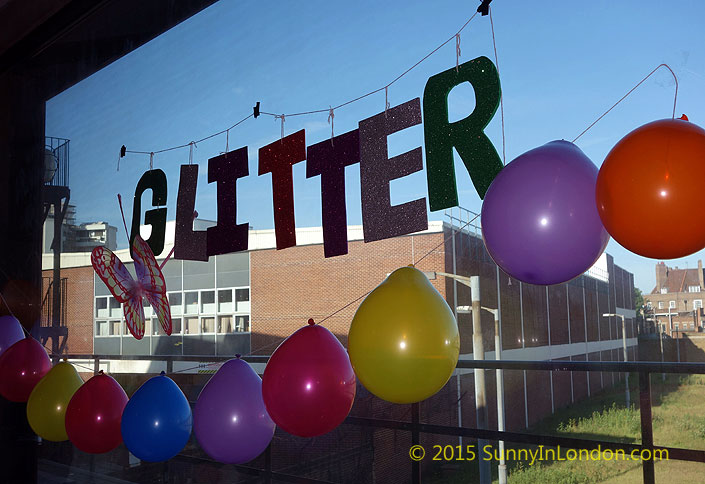 Although, if you’re really curious… why wait? You can just watch here, right now!