How is it really fair to write an Air Malta review based on just one round trip flight? I think that’s a good question for you to for me as you start reading this review.

Is the fact that my flights left late a reflection of the entire airline? Just because my bags arrived with me in the same condition I surrendered them at Heathrow and Luqa airport doesn’t mean yours are guaranteed to do the same. However, if you’ve never flown the airline, you may have some basic questions that I can answer.

Hopefully, the answers and advice will help you make a decision if you’re planning to visit Malta. At the end of the review you will find links to my blog posts and videos about visiting Malta to help your bigger travel plans too. 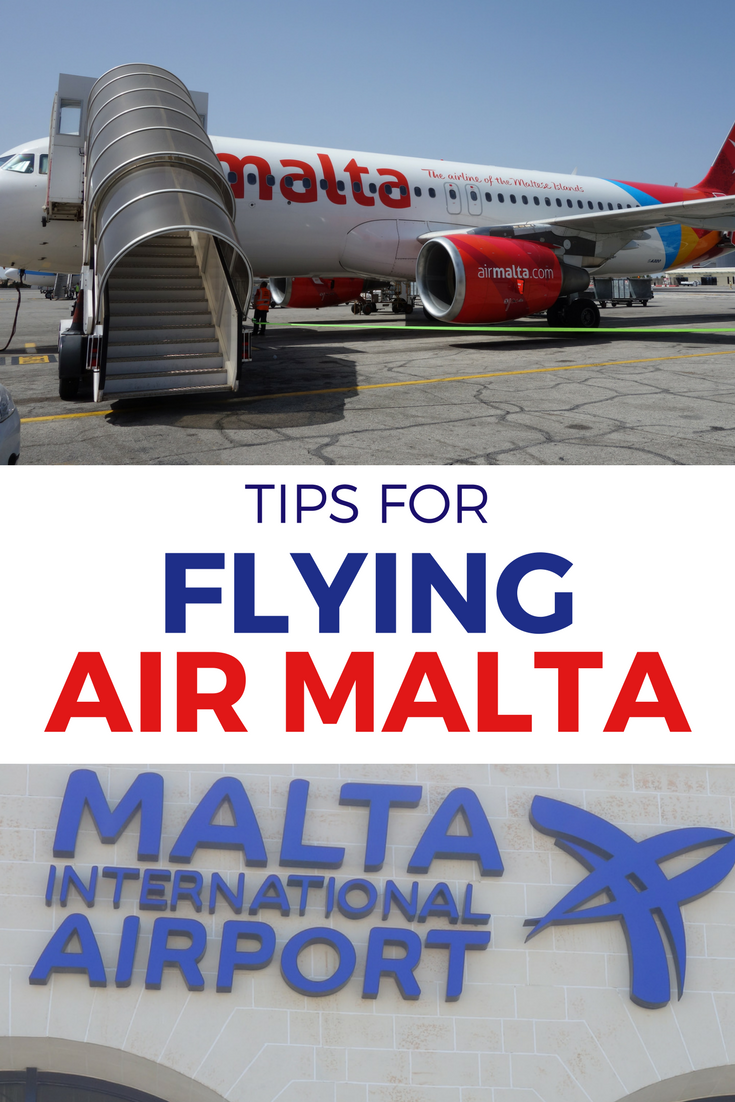 We found the online check in process fairly simple and liked doing this from my iPad the evening before our flights. It also allowed us to check in faster at Heathrow. As we were keen to start our holiday, we arrived at Heathrow at 7:15am on a Sunday for our flight scheduled to leave at 10:50am. The counter for Air Malta wasn’t scheduled to open until 7:50am.

There was no microphone at Heathrow to announce boarding arrangements. We learned that they were boarding from the back to front and were the last group to get on, as we were in Row 5. In the Malta airport, they called rows 1-14 and we didn’t hear them call other rows. This plane boarded faster as people were able to enter from both the front and back of the plane. It also gave us a last fleeting moment in the Malta sunshine because you literally walk outside and up stairs to get on the airplane.

The overhead cabin size was fairly big for what I had anticipated. I wish I had brought my larger carry-on that I use for all of my Delta flights to Florida several times a year. Each row had three seats on the right and three on the left. I felt they were very small compared to the jets I take to America, understandably. I have never been on EasyJet or Ryanair, so I can’t compare. Please leave your ideas about their seats in the comment section!

Both flights left at least 45 minutes late. At Heathrow we were told it was due to luggage loading late. Our plane in Malta was delayed from leaving because the previous plane was late. Then the Captain announced we had to wait another 15 min to leave due to congestion at Heathrow.

You really need to consider possible delays when flying Air Malta if you are changing planes. I would not suggest booking a connecting flight very quickly after an Air Malta flight.

We each received a small sandwich and a bottled water. Other items like beer and crisps are available for purchase in Euros or Pounds Sterling. I would not recommend sitting in an aisle seat in the back of the airplane because of proximity to bathroom. It’s problematic because aisles barely have enough space for one person. This means people coming and going from the toilet are pushing over each other, often in to the faces and personal space of those seated in the aisles.

Despite all the wind that is prominent in Malta, our flights were smooth and uneventful.

We checked a bag that weighed 23 kilos and another much smaller bag. They arrived on time and in the same condition in both airports. As an American expat living in London, I was thrilled when I received a passport stamp in Malta. I also got one when I returned. My English husband did not receive a stamp, but perhaps after Brexit he will.

A big mistake I made that had nothing to do with Air Malta was not going with my husband through the EU passport queue when we returned to Heathrow. I wasn’t sure if it was possible, so I went to the Non-EU passport section. I waited nearly two hours in the queue because huge flights from Singapore and India arrived just ahead of us. I was cursing the delay we had with Air Malta the entire time, as Mr. Sunny sat at the airport bar on the other side of Border Control with our luggage waiting for me. When the Border agent asked if I was travelling alone and I told him my husband had a British passport and was on the other side, he said I could have gone through his line with him.

Note to self- do THAT next time!

To make sure you don’t miss any Sunny updates about visiting Malta, be sure to subscribe to the Sunny News. Upcoming videos and advice articles that will be linked to this article when they are ready include:

On the blog you can also find my review of Grand Hotel Excelsior Malta. I haven’t created a video of the cruise and Blue Lagoon experience yet. If that’s something you would like to see, please let me know in the comments. Also, leave any questions you think I can answer about planning your Malta trip here or on YouTube. If you have been to Malta, it would be great if you can add your advice here too!